Home » Articles » California Could be Drowned by Megastorms

California Could be Drowned by Megastorms 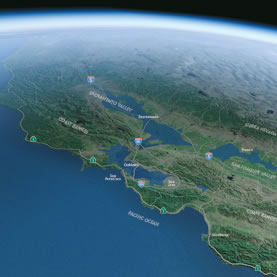 Large flows of vapor in the atmosphere, called "atmospheric rivers," have caused massive floods every 200 years. Climate change could bring more of them upon California in the near future.

Extreme rainstorms moving in from the Pacific Ocean began to strike central California on Christmas Eve in 1861 and continued virtually without any reduction for 43 days. The floods quickly transformed rivers running down from the Sierra Nevada mountains along the state’s eastern border into raging flows that swept away entire communities and mining settlements. The rivers and rains poured into the state’s vast Central Valley, turning it into an inland sea 300 miles long and 20 miles wide. Thousands of people lost their lives, and 200,000 cattle in the state drowned. Downtown Sacramento was submerged under 10 feet of brown water filled with debris from countless mudslides on the region’s steep slopes. California’s legislature, unable to function, moved to San Francisco until Sacramento dried out—six months later. By then, the state was bankrupt.

A comparable disaster today would be even more disastrous. more than six million people live in the Central Valley with 1.4 million of them in Sacramento. It produces about $20 billion in crops annually, including 70 percent of the world’s almonds—and portions of it have dropped 30 feet in elevation because of extensive groundwater pumping, making those areas even more prone to flooding. Scientists who recently modeled a similarly relentless storm that lasted only 23 days concluded that this smaller visitation would cause $400 billion in property damage and agricultural losses. Thousands of people could die unless preparations and evacuations worked very well indeed.

People on the West Coast of North America have long known about storms called “pineapple expresses,” that pour in from places near Hawaii and dump heavy rain and snow for three to five days. These are just one configuration of an atmospheric river. As many as nine atmospheric rivers hit California every year, according to recent investigations. Few of them end up being strong enough to yield true megafloods, but even the normal storms are about as intense as rainstorms get in the rest of the U.S. These challenge emergency personnel, flood-control authorities, and water managers.

Atmospheric rivers also bring rains occasionally to unlikely places like Nashville, TN. In May 2010 there was a catastrophic flood in and around Nashville which caused 30 deaths and more than $2 billion in damages. It was produced by an unusual atmospheric river that brought heavy rain for two days up into Tennessee from the Gulf of Mexico. Substantial flooding in 2009 in southern England and in various parts of Spain was also caused by atmospheric rivers. This phenomenon is best understood along the Pacific Coast, and the latest studies suggest that these rivers of vapor may become even larger in the future as the climate warms.

By Michael D. Dettinger and B. Lynn Ingram
Scientific American