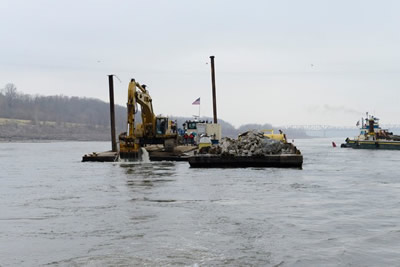 A Midwestern drought has brought the river to water levels so low that that they threaten to shut down shipping on one of the world’s largest navigable inland waterways. The Mississippi, which carries some $7 billion in trade in a typical December and January, is expected to be closed to navigation between St. Louis and Cairo, Ill., when water levels dip toward the nine feet of depth necessary for most tugboats to clear the bottom.

Those who ship goods up and down the river have asked the federal government to do two things: to destroy rock formations known as pinnacles in Southern Illinois that hinder navigation when the water is shallow, and to release more water from reservoirs along the upper Missouri River.

The Army Corps of Engineers has begun meeting the first request, using excavating equipment to break down the formations. Officials said the work should take 30 to 45 days.

Getting the corps to release the water has been more difficult. The corps has rejected requests for large-scale water release from the upper Missouri, saying that it does not have the authority to use that water to aid navigation on the Mississippi.

Senator John Thune, Republican of South Dakota, applauded that decision and called it “unlawful” to release water that states like South Dakota need and use. He said that his region, too, has suffered “significant negative impact” because of the drought.

The Waterways Council, a group that lobbies on behalf of inland carriers, operators and ports, had initially warned that traffic would come to a halt by Monday, but, so far, the water levels have dropped more slowly than expected, in part because of small water releases by the corps. A coalition of businesses involved in trade along the Mississippi and sympathetic lawmakers have asked President Obama to order the water released.

“It would cripple our national economy to shut down the Mississippi River,” said R. D. James, a Missouri farmer and a member of the Mississippi River Commission, which manages uses of the river with the corps. But without action from the president, Congress or the courts, the water will stay behind the reservoirs of the upper Missouri. “When they get a little water in those reservoirs, they don’t want to give it up,” he said.

It could soon be too late to prevent a partial closure. Water takes two weeks to come down from the upper Missouri River reservoirs, and predictions released by the corps over the weekend suggest that without substantial rainfall, the water levels could dip below nine feet by Jan. 11.

With the threat of a shutdown ahead, farmers might decide to hold their grain instead of shipping it more expensively, said Gregory L. Guenther, a farmer and corporate consultant. Since farmers tend to pay for the coming year’s supplies like fertilizer with those sales, they will have to borrow instead, and “that means paying interest on it.” Transporting goods by rail is a less attractive option, he said, because shipping and storage facilities that use the river are not necessarily near rail lines, and rail capacity is limited. Altogether, shifting transportation modes would drive up prices, he said, adding, “Rail is not the answer.”

Rick Calhoun, president of Cargo Carriers, a part of Cargill, noted that carriers are already loading barges more lightly to deal with the water depth, which also ends up raising costs.

“We put less product in the barge, it takes longer to get there, and we use more fuel per barge,” he said. And, he added, “We’re going to be running into very difficult issues.”

Col. Christopher G. Hall, the commander of the St. Louis district of the corps, said, “We’re doing everything that we possibly can to keep that channel at the authorized depth so that they can continue to operate.”

Intense dredging, tweaks and luck have helped push the crisis “to the right” on the calendar, so far, he said, but it is unclear how long that luck will last.

The low water conditions could persist into the spring, when it generally rains more. Experts recommend that in light of these drought conditions, people should seriously starting storing water to tide them over until the rains come again. Water shortages can still get worse into January of next year.

Steven L. Stockton, the director of civil works for the corps, said, “The only long-term solution is more rain.”