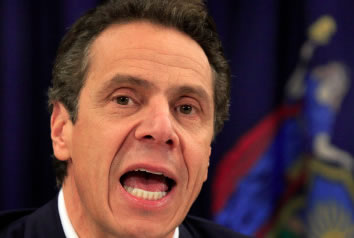 The Governor of New York, Andrew Cuomo, reacting to the destruction caused by hurricane Sandy, calling for the need of more preparedness in a "new age of extreme weather."
Cuomo's news article which is titled, "We Will Lead On Climate Change," details the ways the state needs to make itself ready for future storms and disasters. While only briefly mentioning a single measure to prevent climate change itself.
The governor writes "First we must begin by thinking about where and how we rebuild. The next generation’s infrastructure must be able to withstand another storm. We must also reduce the energy consumption that contributes to climate change — which means, for starters, upgrading our building codes."
He talks about an example of poorly located infrastructure being the Con Ed substation in lower Manhattan. The substation experienced severe flooding when Sandy hit, which caused a great explosion that put much of the island, and thousands of New Yorkers, into darkness.
Cuomo writes that the state needs to build "redundancies into our fuel system and place generators and pumping systems that are readily deployable." addressing the gas shortage that followed Sandy.
Cuomo insists we must "diversify" our transportation options, so people aren't stranded at home. New York City's mass transit was paralyzed by Sandy.
The majority of Cuomo's op-ed is focused on New York's electrical system, which Sandy severely disrupted, cutting off power to hundreds of thousands of New Yorkers.
Calling the electric power grid system, "the equivalent of vinyl records in the age of the iPod: antiquated, 1950s-style institutions that don’t serve our current needs," Cuomo calls for the investigation into weaknesses in the state's power utility companies and how they respond to disasters.
It was confirmed on Wednesday that the Long Island Power Authority and Con Edison had been subpoenaed by New York Attorney General Eric Schneiderman.
Cuomo is expected to announce the formation of three commissions to look into making New York more prepared for future extreme weather.
Both the governor and Mayor Michael Bloomberg put the blame for Sandy directly on climate change immediately following the storm.
"We have a 100-year flood every two years now," Cuomo said he told President Obama following the storm.
- Reported by Huffington Post