Contact Us Processing delay up to 8-10 weeks, some food items. 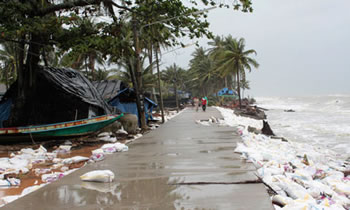 Sir John Beddington says that governments must act because of climate change and more older people and rapid urbanization.

The UK's chief scientific adviser warned that aging populations and urbanization in some of the world's poorest countries makes them increasingly vulnerable to natural disasters.

"Vulnerability will go soaring," said Sir John Beddington. "Extreme events will happen every five years instead of every 20. Vulnerability will come from changing climate, demography and most people living in cities."

Reducing the risk of future disasters calls for building resilience into urban infrastructure, ecosystem protection, and mobile telephone regulation. These measures will help reduce the cost of future disasters. Past disasters have outstripped international aid over the past 20 years and led to the loss of 1.3 million lives and caused $2 trillion in damage.

The number of people over the age of 65 in under developed countries is projected to nearly triple between 2010 and 2040. Older people are the most vulnerable group during a disaster even though they may have copping skills and experience.

8 out of the 10 most populous cities in the world are at risk of being affected by an earthquake severely. 6 out of 10 are vulnerable to storm surge and tsunami waves. The urban population in developing countries is projected to rise by 65 million a year from 2.6 billion in 2010 to around 4.7 billion in 2040.

"The speed of urbanization in developing countries means that the future vulnerability and exposure of cities will be disproportionately important. Urban design and planning that both improves the quality of life for residents and makes expanding cities resilient to natural hazards is therefore a key priority," said the report.

Earthquakes in ver large cities are a great threat, so does flooding for cities that are in coastal areas. Despite advances in forecasting, preparing for earthquakes will be a challenge as both their timing and severity are difficult to forecast.

Scientific advances in understanding natural disasters should be expected to continue in the next ten years. How far and how quickly such improvements will happen is unknown, but if research continues at the current rate, there will be ever increasingly reliable forecasts predicting the timing and location of future natural disasters.

"Together progress in these areas will improve the forecasting of disaster risk and provide opportunities for effective disaster risk reduction, provided that those who need to take action have ready access to the information," the report said.

"Natural disasters hit those in the developing world particularly hard. But the developed world is not immune, as we saw with Hurricane Sandy in the US and the Caribbean last month," said Justine Greening, the secretary for international development. "Resilience is about boosting a country's ability to deal with disasters – whether it is helping people in earthquake zones build to withstand shocks or helping poor farmers to grow drought-resistant crops. Reducing the impact of natural disasters saves money, lives and livelihoods, especially in developing countries."

Only 1% of overseas development aid was spent on disaster risk reduction from 2000 to 2009. The report is part of the government's response to Lord Ashdown's Humanitarian Emergency Response Review commissioned by the Department for International Development, released last year.