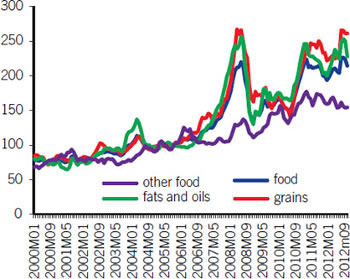 The trend in international food prices is steadily increasing. Current prices remain close to all-time highs seen in 2008. Even though the world appears to have averted a crisis of global food prices, there is a growing sense of a “new norm” of volatile and high food prices. More resources, better information, and good policies are still needed to end hunger for 870 million hungry people around the world.

International food prices have not been uniform across commodities in the third quarter of 2012. This reflects different dynamics after the price hike in July of 2012. The corn market remains tight around the world despite the good news of slight easing of the global price of corn during the last three months of 2012. The US Department of Agriculture predicts that the global production for food and stocks for 2012 and 2013 will decline by almost 5% this year and 12% in 2013. The United Nations Food and Agricultural Organization projects that the global use of corn for feed and industry will decline because of limited supplies and high prices.

Firm international prices, which were on the rise in the last part of the year, have created increasing concerns on wheat production. Dry conditions that have continued have caused production declines in three of the largest Black Sea exporters as well as in the EU and in Australia.

There is no guarantee for favorable price trends in the future based on the lowering of grain prices in this quarter. High prices may destroy demand for corn and wheat. Current weather will effect to a large degree the immediate price trends we see. We are very thankful that July price hikes have not created a global food crisis yet, there is still a sense that volatile and high prices are going to be normal for quite some time.

In light of all these high and volatile food prices, online food storage stores will increasingly play a major role in allowing average Americans to smooth out the spikes and hedge against future high prices. Buying grains and beans at a food storage store during these few months of price dips is recommend before huge prices increases of up to 12% in the first quarter of 2013.

About the author: Daniel Baldwin

I run a web development business located in the hills of Sweet Home, OR. I am interested in health, Christianity, gardening, and storable food.