Home » Articles » Selecting Guns for Your Bug Out Bag

Selecting Guns for Your Bug Out Bag

To be truly prepared for any emergency or disaster situation, having a "Bug Out Bag" (BOB) prepared and easily accessible is a must.  Having said that however, you should understand that surviving in place is HIGHLY preferable to bugging out.  The only time you should even consider using your carefully prepared BOB is during or after a disaster situation in which hunkering down at home is not possible.  This might include a flood, hurricane, tornado, or other disaster that renders your home unlivable.

The items you include in your BOB will depend on your situation and no two bug out strategies will be the same.  Variables such as your location, destination, group size, age and physical abilities of group members are just a few things that must be considered when planning what to include in your BOB.  This article is meant to address only the various firearm options available and is not an exhaustive discussion of even this narrow subject.

There are two reasons to include firearms in your BOB.  The first reason is to hunt for food.  If you are alone or with a small group, you'll find it easier and more convenient, not to mention less wasteful, to hunt for smaller game such as rabbits, squirrels and game birds.  The second reason, and one you should avoid if possible, is to defend yourself and your family against large animals and/or psycopaths who believe that the only preparation they will need is a firearm to take what they want from others.  Don't be so naive as to believe such people are rare.  I have personally spoken with several seemingly normal people who have unashamedly expressed just such a plan.

As with all of our columns, your views and opinions are welcomed and will be considered as additions to upcoming newsletters.  Please keep in mind that we are only discussing a "get out of Dodge" scenario in this article rather than other possibilities available to disaster survivors who are able to stay put in their homes.

A good choice for many bug out situations is a .22 caliber rifle.  It's the obvious choice when foraging for small game yet is also capable of taking down larger game such as deer with proper shot placement.  An important consideration for a BOB is the size and weight of ammunition.  With a .22 caliber weapon, it's easy to carry several thousand rounds whereas you will be limited to only a few hundred with larger caliber rifles and handguns.

My personal choice in this category is the Ruger 10/22 as it is readily available at a reasonable price (around $200 or less).  Additionally there are a wide variety of custom accessories available for the Ruger 10/22 including various stocks and high capacity magazines.  Although you should steer clear of the cheaper magazines as reliability can be an issue.  I'm perfectly happy with the standard 10 round magazine and recommend that you have at least 5 or 6 of them loaded and ready to go for an emergency.

Another good choice is the Remington International 410 Ga/22 LR Over & Under.  Again, it is excellent for foraging and gives you a choice between the .22 caliber and the 410 gauge shotgun, which can be very effective in taking game birds, all in one weapon.  Although I don't have personal experience with this weapon, the main drawback seems to be the relatively low capacity of only two rounds.

The downside of the .22 caliber Long Rifle cartridge is limited range, penetration and stopping power when used for self-defense.  Hollow point rounds are inexpensive and readily available so I recommend them over a brass jacketed or lead bullet, in a survival situation, as they are more effective in stopping an adversary or taking down larger game. 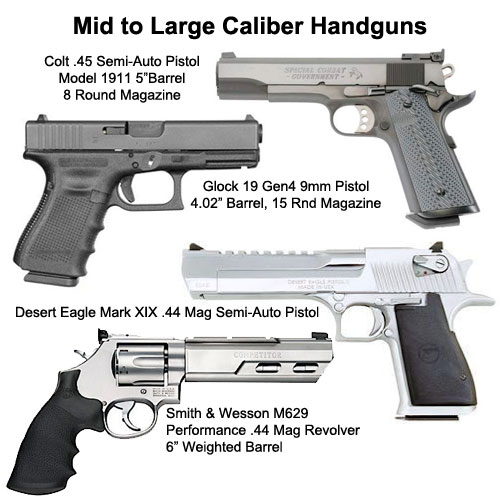 If you will be leaving an urban area and expect to encounter organized gangs or desperate individuals blocking your way, it would be prudent to include a backup handgun chambered for a cartridge suitable for self-defense.  A 9mm or 38 Special would be the smallest calibers I would consider for that purpose.  Anything less powerful might prove ineffective.

Even with the 9mm or 38 Special, you should seriously consider using only +P rounds such as the 115 or 124 grain JHP (Jacketed Hollow Point) +P in the 9 mm or 158-grain lead semi-wadcutter hollow point .38 Special +P to defend yourself against the ruthless fellow survivors I mentioned above.

If you will be bugging-out from or headed to an area known to be home to large animals such as grizzly bears, moose or mountain lions, you should definitely include something more powerful than the 9 mm or 38 special mentioned above.

In such a scenario, if you are in a group, at least one member should carry a center-fire rifle chambered for 30.06 or larger.  If you are alone, consider replacing the .22 caliber weapon mentioned above with this more powerful rifle.  Another option to protect yourself from large animals would be a magnum revolver with a 5.5" to 7.5" barrel chambered for .44 Magnum or larger.

When escaping from an urban area, your first priority should be to avoid an armed conflict of any kind.  That doesn't mean you are a coward, only that your chances of survival will be exponentially increased if you don't get into a firefight.  Your life and those of your family and others in your bug-out group are not expendable.  The best way to avoid a conflict will be to stay out of sight and away from high traffic areas.  Stick to less travelled roads and, if possible, travel at night.

In an urban escape scenario, especially in a group where carrying several weapons is possible, you should consider including a semi-automatic, military type rifle such as the AR-15 or the AK-47.  Either weapon can be configured with a collapsible or folding butt-stock, laser targeting and high-capacity magazines.  These could also serve for hunting larger game if your group is small and limited to one or two long guns.  As with any of the more powerful weapons, you must also consider the weight and bulk of your ammunition.  How much can you carry?

Many folks are passionate about firearm choices and we look forward to hearing your thoughts on this controversial subject.

About the author: James Brewster

Jim Brewster is a former US Navy Aircrew Combat Cameraman with extensive training in desert, jungle and cold weather survival.  He is a dedicated American patriot whose only king is our Creator.