Home » Articles » Why Are Americans Buying So Many Guns?

Why Are Americans Buying So Many Guns?

Are Americans suddenly more interested in hunting?  Is there a recent uptick in home invasions against which people feel a need to protect themselves?  Is the hobby of target shooting drawing millions of new enthusiasts?  Or is there some other reason for the recent explosion of gun sales in America? 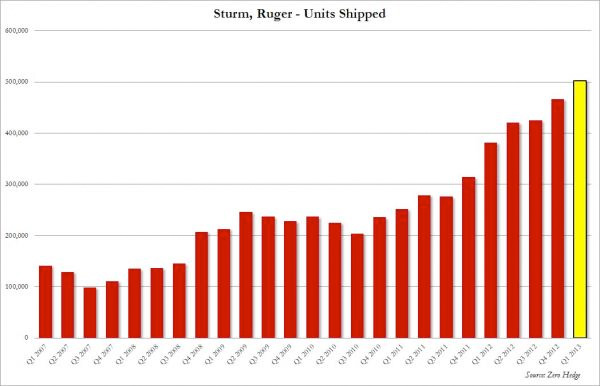 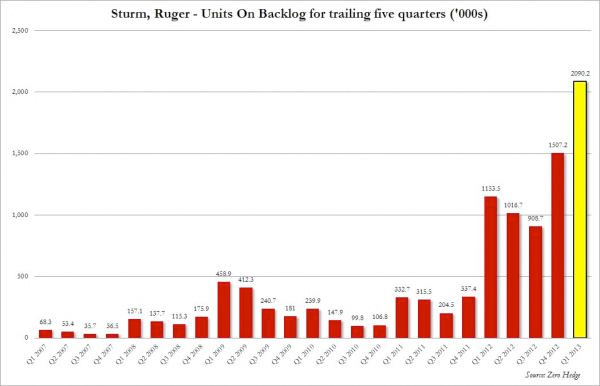 According to a recent report from Zerohedge, sales of new firearms by the Sturm Ruger company topped 500,000 units in the last quarter with backorders exceeding two millian weapons!  These numbers are from a single manufacturer and represent only a small percentage of total weapon sales in America during the first three months of 2013. (Click to enlarge graphs to the right.)

Ammunition for the most popular calibers is unavailable throughout most areas of the United States and  shortages have become so acute that retailers have begun rationing ammo sales to only two boxes per customer when supplies are available.  For the last several months, the ammo shelves at Walmart have been nearly empty and I was told by a clerk that people come in everyday looking to buy any of the common calibers before they are put on the shelves.

This has continued even after the "gun grabbers" in U.S. Senate failed to pass a bill calling for expanded background checks for gun sales.

A spokesman for Hornady, a major ammunition manufacturer is quoted in a May 25th article in The Daily Caller:

"The current political climate has caused extremely high demand on all shooting industry products, including ours.  Empty retail shelves, long backorders, and exaggerated price increases on online auction sites - all fueled by rumors and conjecture - have amplified concerns about the availability of ammunition and firearms-related items."

"Remington is in a large backorder position at this time," said Remington spokeswoman Jessica Kallam. "We are at full capacity with a majority of categories of ammunition.  We are continuing to look at how to increase capacity and supplying ammo products to the various channels of distribution/sales that we support."

According to ABC News reporting on the total number of gun sales in 2012:

"In December, 2,783,765 total background checks were carried out to purchase firearms, surpassing the previous record from November 2012 when 2,006,919 checks were performed." 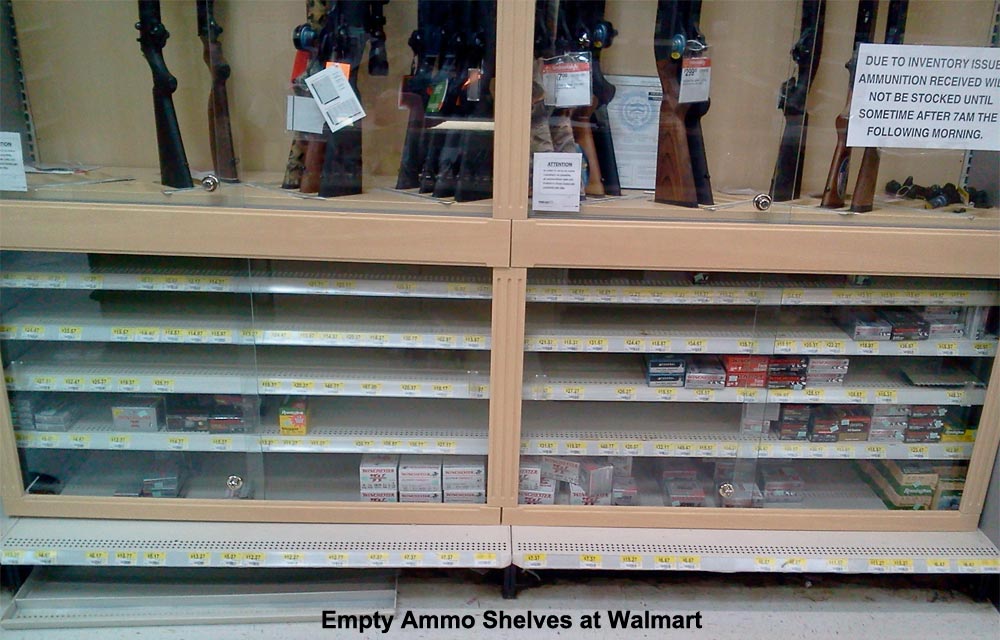 People often buy more than one gun when a background check is conducted so total gun sales in 2012 probably exceeded 20 million and, so far, the numbers in 2013 are still rising.

Wow!  It seems that the statement made by Japanese Admiral Yamamoto after the invasion of Pearl Harbor in 1941, that Japan could not attack the mainland of the United States because there would be a rifle behind every blade of grass is truer today than is was at that time.

Magazine sales too, have increased dramatically throughout America.

According to The Blaze:

"Brownells, the largest gun parts supplier in the world, is claiming that it has had an 'unprecedented' demand for AR-15 ammunition magazines of late. In fact, the demand is allegedly so great that the company allegedly sold 3.5 years worth of magazines in just three days during December of 2012."

Let's return to my question: Why are Americans continuing to buy such unprecedented numbers of guns, ammunition and magazines?  Especially in light of the fact that they have already purchased these items in such huge numbers for the last several years?

Until the Senate's recent failure to pass more stringent gun laws, restrictions on magazine capacity and expanded background checks, the obvious answer might have been that Americans were fearful of such laws taking effect.  However gun sales haven't slowed or even taken a breather in the wake of these gun control laws failing to pass the legislature.  Americans are still buying and stockpiling firearms in record numbers.

There can be only one answer.  Folks are seeing the writing on the wall with reports of ammo purchases by Homeland Security surpassing 1.6 billion rounds in 2012.  Americans are afraid that something very sinister is about to happen.  It could be outright gun bans by our servant government via executive order, bypassing our 2nd Amendment through U.N. treaty, complete collapse of our economic system, an ever more militarized police force or the destruction of our electric grid due to a large solar storm.  The possible frightening scenarios seem almost as numerous as newly purchased guns in our streets.

The Food Storage Guys only hope that Americans are also stockpiling food, water filters, heirloom seeds, solar power generators, grain mills, emergency shelters and other survival gear and aren't planning to use their newly acquired firearms to take what they need from those of us who have carefully prepared for emergencies with a well-rounded survival plan.

Your thoughts are welcomed.

About the author: James Brewster

Jim Brewster is a former US Navy Aircrew Combat Cameraman with extensive training in desert, jungle and cold weather survival.  He is a dedicated American patriot whose only king is our Creator.